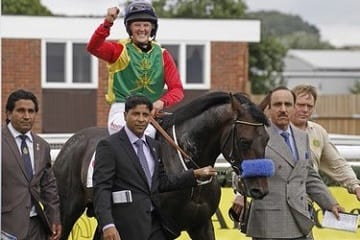 Amateur jockey Ellie Mackenzie will be looking for wins on home territory on Sunday 13th at Taunton Racecourse.

Having already notched up a winner at the season opener at Chelmsford City on 21st April for trainer Nikki Malcolm Taunton lass, Mackenzie will be looking to maintain her form for the first Arabian meeting on the turf.

Mackenzie; renowned for her smile, is exceptionally well thought of in both Arabian and Thoroughbred racing and as the Racing Welfare Jockey Ambassador, she looks to support not only her own career but share her aspiration with other young people, demonstrating that hard work and focus really can reap the benefits of a career in the racing industry.

Having enjoyed a fantastic 2017 season Mackenzie was recognised for her success as a nominee for the coveted HH Sheikha Fatima bint Mubarak Darley Awards in March this year where she was invited to join world-wide participants at a glittering Awards Ceremony and Gala weekend sponsored by the HH Sheikh Mansoor bin Zayed Al Nahyan Global Arabian Flat Horse Racing Festival, in Hollywood, on 6th April, the nomination was in recognition of her many wins but specifically a first win on her first ride at DIAR, the prestigious Dubai International Arabian Races held at Newbury Racecourse in July, where she came home winner of the high class Group 2 Emirates Equestrian Federation International Stakes, competing against professional riders on the Arabian Riyam who she had also ridden and won on at his debut.

Ellie’s return to Taunton Racecourse on Sunday 13th May will see the Arabian Racing Organisation (ARO) return for their second meeting of the season, and first on turf. Whilst most people will think of Taunton as a jumps track, ARO will be racing on the flat over a seven race card that features races from one mile, to one mile five furlongs for pure bred Arabians.

The ARO meetings at Taunton are firm favourites with trainers who enjoy the reception from an enthusiastic Somerset audience. Racegoers can expect a good number of horses on the day, from top Arabian Trainers, Taunton meetings have also produced some interesting winners for more valuable races later in the season so it’s a great opportunity to spot something to follow.

Approximately a second per furlong slower than thoroughbred racing Arabian racing is an ideal environment for young jockeys to learn their trade. Jockeys often progress to riding under rules having fuelled their enthusiasm while racing with ARO one of note especially in Somerset is leading National Hunt jockey Tom Scudamore who many Taunton regulars will know from the jumps fixtures at this course.

Operated under British Horseracing Authority (BHA) rules, the Arabian breed is seen throughout the season competing on racecourses across the UK on both Thoroughbred and standalone fixtures. Following this meeting ARO will be returning to Taunton on 8th September.

If you want to get ahead and study the form prior to racing, the website www.arabianraceform.co.uk makes things easy for you by producing form for all the declared runners at every ARO meeting. For more information on ARO go to www.aroracing.co.uk

The Racecourse will be providing catering and bars for racegoers – come and enjoy a great value, fun day out.