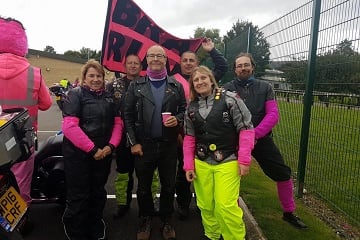 The 12th annual “Bra Run” welcomed bikers and supporters recently during the fundraiser for Breast Cancer at their new start venue, J24 in Bridgwater.

The Bra Run has some fun with bikers spending some serious time and effort in decorating their bikes and themselves in pink regalia.

It was started in 2006 by Bridgwater bike rider Dave Ellis, who had lost a close friend to cancer and wanted to do something to help raise funds for Cancer Research.

The weather forecast for the day wasn’t good, with increasingly heavy showers and strengthening winds forecast throughout, however, a fair number (about 60 in total) of committed Bra Run supporters did brave the elements to assemble.

Mike Batchelor, the organiser of this year’s Bra Run said “We’re really pleased to have a new start and finish venue for this year. The management at Junction 24 have generously allowed us to use their parking area and café, so we’ll have plenty of room for everybody who wants to join this year’s Run and a great breakfast to start the day.

“The new venue also meant a slightly revised route, out across some of the most attractive parts of the Somerset Levels and including an invigorating blast through Cheddar Gorge. The rain held off for the first leg, from Junction 24 to our pit stop at the Kings Leisure Centre in Cheddar, but from there on the showers became more frequent and heavier.
The second leg, which included Cheddar Gorge, was pretty damp and we arrived back at Junction 24 pretty well soaked but in good spirits, knowing that everybody had completed the 100-mile circuit safely and without incident.”

They have already beaten the fundraising target of £1500 and hope to get more for Breast Cancer Now.