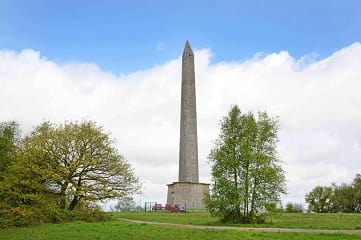 The long awaited repairs to Wellington Monument are scheduled to start in a little over a year, the National Trust has announced.

The detailed design work for repairs to the 175 feet high obelisk is being done this year and the Trust expects to go out to tender for companies who will carry out the repairs by the end of the year. Work would then start on site in early summer 2019 and continue for most of 2020.

However, the Trust expects to only be able to repair the most badly damaged areas of the monument, because so far it has only been able to raise half of the nearly £4m needed to do a full repair.

‘We have raised half the money so far and we will shortly recruit a Community Fundraiser, but the remaining £2m needed is an ambitious target. We are hugely grateful for all the help and support we’ve already received including from our volunteers and Wellington Town Council. We’re going to need to keep working together if we are to hit this target’ said Helen Sharp, the Wellington Monument project manager.

‘The monument is deteriorating. Our intention is to start work on the most damaged parts and repair the top third as well as correct the bulging north face and continue to work down while we fundraise. If we can raise enough money, the repairs will reach ground level and we will be able to safely reopen the monument to visitors once more.’

The money the Trust has raised so far includes a £1m grant from fines levied on the banking industry for manipulating the LIBOR rate, but recently had an application to Heritage Lottery Fund turned down.

As well as completing the detail design work, the Trust’s project team will explore other fundraising opportunities this summer. They will also be out and about talking to people locally about the problems faced by the monument, listening to why it’s important to people and letting the community know how they can help and get involved.

Helen Ghosh, the Trust’s Director General said: ‘We are investing more than ever before – over £100 million a year – in conservation, looking after the properties in our care. This would not be possible without continued support from our members, volunteers and the public. We recognise that the Wellington Monument is a landmark that means a lot to many people and we want to see it back in a good state of repair. We hope that our campaign, to be launched later this year, will help us ensure that the monument can be fully repaired.’

Rebecca Pow, MP for Taunton Deane and a keen supporter of the Wellington Monument added:

‘It is exciting to know that work is due to start although there is still a long way to go and more money to be raised to reach the target. I have personally done a lot of work to raise the profile of this project, including a petition across Wellington, so knowing how passionate people are locally about their monument, I’m confident this community will be ready and together we can achieve what we need.’

Work to build Wellington Monument, to commemorate the Battle of Waterloo in 1815, was started in 1817 but it took until 1853 for it to be completed because of a shortage of funds. The lack of money led to shortcuts being taken which have made the top third of the monument more vulnerable to damage – and in more urgent need of repair.

The National Trust was given the monument in 1934 but without an endowment which could fund its maintenance. It has been closed and surrounded by fencing since 2005 after cracks were found in the masonry.

At 175 feet (53m) high, it is the tallest monument of its kind in the UK – and the second tallest in Europe. There are 232 steps inside which previously allowed visitors to climb the monument and see out through a viewing window.

More information is available on www.nationaltrust.org.uk/wellington-monument