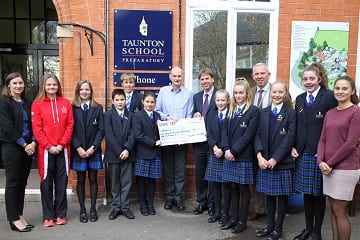 Taunton School handed over a cheque worth a huge £9,802 to the spinal charity Aspire on Monday after months of fundraising for an epic 3 mile swim across the Solent.

In the lead up to their swim, all of the children involved held charity days and cake sales to raise much needed funds.

Aspire provides practical help to people who have been paralysed by Spinal Cord Injury, supporting them from injury to independence and was chosen after teacher Hamish McCarthy recovered from a serious injury with their support.

Hamish McCarthy who is Swim Coach and Pastoral Head of Year 7&8 and leads the Taunton School Long Distance Swim Club said: “Aspire is a great charity and it is one that is close to my heart because they helped me overcome my spinal injuries. What a way to raise money, swimming the Solent. From the fastest to the slowest, everybody rose to what is a considerable challenge, they all conquered the Solent.”

Andrew Ogierman, from Aspire, said: “It is remarkable what they achieved and how much money they have raised. They will never meet the people they help. They achieved things they probably thought they never would in swimming 3 miles across to the island and the money they have raised will enable people to live independent lives that perhaps they didn’t think they would when they were first injured. Huge thanks to Taunton School for enabling them to do this.”