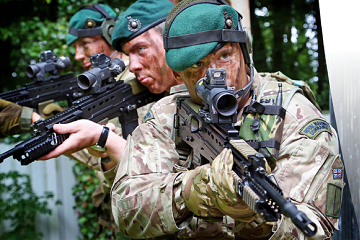 TAUNTON is gearing up to celebrate with 40 Commando Royal Marines as they mark 35 years at Norton Manor Camp.

The Borough Council is organising the home-coming parade on Saturday June 30, in partnership with the Royal Marines, and the message to all those planning to line the streets is: Be prepared – and be early!

Car parking is likely to be at a premium on the day so drivers are being advised to find a space in one of the public car parks early. Those living in Taunton are advised to walk or cycle if possible.

All car parks will be open as normal on the day – but cars will be held in The Crescent car park between 11.30am and noon while the parade passes. As the weather is forecast to be hot and sunny, spectators are strongly advised to
bring plenty of water, slap on the sunscreen and make sure the very young and the vulnerable will be able to cope with the crowds and the heat.

A number of town centre roads will be closed from 9am and most will not fully reopen until around 1pm – so careful journey planning is advised.

The Royal Marines are to step off at 11am and make their way from Priory Bridge Road to Fore Street via the Town Bridge and North Street. The parade will halt close to Castle Bow where the Mayor, Cllr Catherine Herbert,
inspect the troops with Somerset’s Vice Lord Lieutenant, Brig David Godsal. She will welcome the Marines on behalf of the community and addresses will also be made by Brig Godsal and the Commanding Officer of 40 Commando, Lt Col Paul Maynard.

The parade will then move off along Corporation Street, The Crescent and Upper High Street and on into Vivary Park. There the troops will gather at the War memorial for a short service of commemoration and remembrance. Wreaths will be laid by the dignitaries.

A separate ceremony will take place at the Marines Memorial Stone where a similar service will be held and a wreath laid. The Marines will return – informally – to rejoin their transport back to Norton Manor.

Viewing space will be available along the route but there will be restricted views around the dais in Fore Street where the dignitaries will gather for the inspection and speeches.

Buses will continue to operate to the bus station, diverted via Tangier Way and Tower Street, while the taxi rank in Corporation Street will not be operational in the morning. Taxis will be available at the rank near the bus station.
Affected roads will reopen as soon as possible after the parade but this is unlikely to be before 1pm.

The following roads will be closed on a rolling basis between 10.45 and noon to allow the parade to pass: