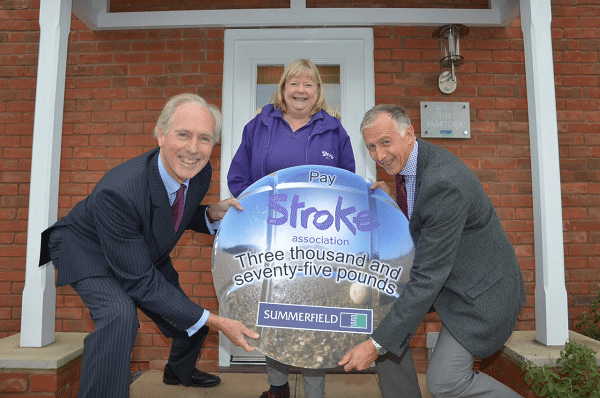 Summerfield Developments has handed over £3,075 to the Stroke Association on World Stroke Day, following the company’s fundraising efforts over recent months.

The Taunton-based property developer chose to make the donation to coincide with World Stroke Day on 29th October giving the Somerset branch of Stroke Association a combination of funds from both their boules event last month and a recent company golf day.

Summerfield’s charity Boules tournament is in its sixth year and drew 40 teams from a variety of Somerset businesses to the event at Woodlands Castle in Taunton.

Ben Trickey, Summerfield’s Divisional Director who organised the event, commented: “As in previous years, the weather was kind and it was a fantastic success; we had a really good turnout and it was great fun. The Stroke Association was chosen by staff as our charity for 2016 and we are delighted to support them. I’d like to thank everyone involved for their generosity in helping us to raise even more money than last year’s event for a very worthwhile local cause.”

Richard Lloyd, Summerfield’s Executive Chairman, and Richard Nicol, Divisional Director at Summerfield invited Sarah Miller of the Stroke Association to Haygrove Park, one of Summerfield’s housing developments in Bridgwater, to have a friendly game of boules. Sarah was then presented with a very special giant boule to mark the occasion of their donation.

Sarah Miller, Service Development Manager at the Stroke Association, commented: “We are very grateful to Summerfield for their kind efforts in supporting us, and to the many local businesses who have supported their fundraising efforts with boules and golf events. Stroke is the fourth largest cause of death in the UK, and thanks to Summerfield we can provide vital support to those who need it, and also help to fund important stroke research in the future.”

To register interest in next year’s Boules event, please email Gill Ellis at Summerfield on gellis@summerfield.co.uk and to find out more about The Stroke Association please visit www.stroke.org.uk