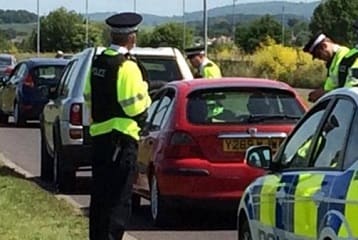 They arrested 133 people for drink and drug driving in a month-long crackdown. Of those arrested, 74 people have been charged and a further 30 have been released under investigation¹. The highest reading recorded during the campaign was 147ug which is nearly 4x the legal limit.

Operation Tonic ran from 14th June – 15th July, a period aligned to the World Cup and during a number of significant local events and throughout period of unusually hot, sunny weather. Contrary to previous operations, the activity not only involved enforcement but also focused on education and engagement. Whilst high visibility and covert patrols targeted drink and drug drivers, neighbourhood teams and cadets partook in targeted leaflet drops which warned drivers about intensified patrols and provided useful advice.

Supt Andy Williams, Head of Road Safety in Avon and Somerset Constabulary says: “Our approach to Op Tonic promotes education over prosecution where possible, with the ultimate aim to reduce deaths, serious injuries and crime related to drink and drug driving.

“I’d like to thank the public for their support with this campaign and for sharing vital information with us. The reports received from local communities is an important part of identifying and tackling drink driving and our dedicated reporting line is always open.

“Despite losing out on World Cup glory, there are still lots of celebrations and parties planned over the summer and I’d like to remind members of the public that there is never an excuse for driving whilst intoxicated. Anyone who chooses to do so not only risks arrest but more importantly, their own lives and the lives of others.”

Avon and Somerset Police and Crime Commissioner Sue Mountstevens says: “It is never acceptable to drink and drug drive.  When driving under the influence of any substance and taking to the road in a vehicle, you put both yourself and others at risk and the consequences can be devastating.

“The police are committed to keeping the roads of Avon and Somerset safe for all who use them.  I believe the majority of law-abiding people support the police in doing all we can to bring offenders to justice, keeping the roads safe not only this summer, but all year round.”

Avon and Somerset Police received approximately 370 tip offs from members of the public who were asked to call or text with information about intoxicated drivers. In 50% of reports attended by an officer, a driver was arrested. This positive response shows the local public understand the impact of this behaviour and their willingness to help us bring people to justice.

Although the Op Tonic campaign is now over, people are still encouraged to tell the police if someone don’t stop driving while drunk or drugged before someone gets hurt. Call 999 if you know about someone who is currently driving under the influence. In less urgent cases and when the driver isn’t behind the wheel, text 07400 279101 with the word ‘drunk’ and details of the car, location and driver.