From Russia With Love Concert 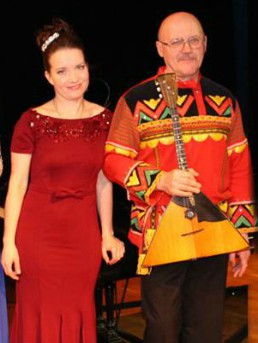 From Russia With Love, a Concert of Traditional Russian Folk and Classical Music

Once a year virtuoso balalaika player, Sergey Kossoff travels from his home in Russia to join his pianist daughter, Ekaterina Shetliffe on a short concert tour of the South-West and further afield. Their programme will include a variety of favourite music at the heart of the Russian culture.

Sergei Kosov is a prize winning virtuoso balalaika player from Tula, Russia. Originally graduating from the prestigious Gnesin Academy in Moscow, he has established a renowned international performing career over the years, appearing as a soloist with many traditional folk orchestras and ensembles in Russia, USA and Germany.

Ekaterina Shetliffe is a graduate of Dargomizsky College of Music of Tula. She has enjoyed a career as concert pianist, giving solo performances in various venues and festivals in Devon, The Midlands and in London. She is a dedicated piano teacher, working at Exeter University and Queen’s College, and founded of the educational studio ‘Creative LLAMA.