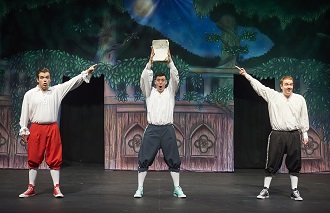 Following the incredible successes of The Complete Works of William Shakespeare (abridged) [revised] (2015) and Dickens Abridged (2015) Reduced Shakespeare Company and Seabright Productions present
William Shakespeare’s Long Lost First Play (abridged) By Reed Martin and Austin Tichenor
Acclaimed stars of the West End stage, the Reduced Shakespeare Company, are back with another barnstormingly irreverent and breathtakingly hilarious celebration of our cultural heritage – as seen through the eyes of three Americans wearing trainers. In a better-late-than-never nod to Will’s 400th anniversary, the bad boys of abridgement present this ‘new’ play by the man himself, as discovered in a Leicester car park!
All of the Bard’s greatest characters and plots feature in this single work of dramatic genius, that he later decided to turn into 37 separate plays – in a move that Hollywood studios would have admired, if they’d been around in the 16th century.
The show, mercifully abridged by the RSC from its full hundred hour running time to a more palatable ninety minutes, embarks on its debut UK tour following world premiere seasons at the renowned Folger Shakespeare Library and the Edinburgh Fringe.